Kid Dracula (ドラキュラくん, Dorakyura-kun?) is a parody of Dracula's son from the Castlevania series. According to the instruction booklets, he is 10,009 years old and son of the "same Dracula from Akumajō Densetsu".[1] He is the main protagonist and playable character in Akumajō Special: Boku Dracula-kun (Famicom/mobile phones) and Kid Dracula (Game Boy).

Two Castlevania related characters appear in this game: Dracula-kun and Kid Dracula. The relation between them is unknown, although Kid Dracula could be a younger version of Dracula-kun or his younger brother. His weapon set is based on Axelay. 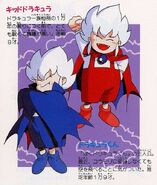