It is fought just before Elephant Gear in stage 7. It is arguably the hardest gunwall boss in the series, and one of the hardest bosses in the game.

First, Keeper's Core makes artificial Gravity waves on the top and bottom to try to make the player crash while its firing plasma shots at the player. Instead of making Duckers, the duckers come from the left of the screen and attack.

When the player destroys the three weapons that fires plasma shots, Keeper's Core stops the gravity waves and charge at the player and starting to move back and for the first time this is the gunwall that can actually move on it own. It will then release Fire Cannon from its top and bottom hatches, and the Ruta hazards the player used at an early section of the stage, are now an obstacle, coming from the left and bouncing on the screen, they can be very annoying, but they are also needed from protecting the player from the Fire Cannons continuous flames. If the player doesn't destroy the boss in time, it will try to ram into the player and repeats its phrase again. After it is destroyed, Elephant Gear awaits. 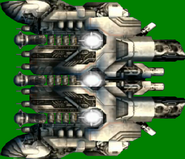