The Jumping Moai (ジャンピングモアイ, Janpingu Moai?) is a recurrent miniboss in the Gradius series. As its name implies, it is a Moai that instead of being affixed to a surface, it jumps around, trying to collide with the player. They are usually encountered in groups.

The Big Moai first appeared in the sixth and last stage of Salamander, and then they made another appearance in the fifth level of Gradius II. They usually attack in groups, although in the NES port of Gradius II, a single Jumping Moai acts as the miniboss of the Moai level, and two in the last stage from the NES port of Life Force.

The Jumping Moai jumps left and right, trying to collide with the player's ship. It also spews a great quantity of ion rings, considerably more than most other types of Moai. 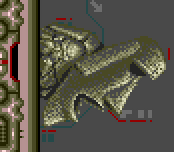