1 or 2 players
Jikkyō Oshaberi Parodius (実況おしゃべりパロディウス?, lit. "Chatting Parodius Live!") is the fourth game in a series of parody shooters produced by Konami. The gameplay is stylistically very similar to the Gradius series, but the graphics and music are intentionally absurd. The game, as its name would suggest, contains a large amount of Japanese voice samples shouted out in a style similar to that of a game show host. Unlike the previous two titles, Jikkyō Oshaberi Parodius was not created as an arcade game. It was first released on the Super Famicom in 1995 and then ported and updated for the PlayStation and Sega Saturn as Jikkyō Oshaberi Parodius ~forever with me~ in 1996.

Seeking "The Glory of the Past", 11 friends went on a adventure and a great war that involved the whole universe began.

This battle caused half of the population in the entire universe to develop hemorrhoids in fear of their actions.

At last they reached the final stage of the war...

Scattered to space... Time passes on...

A great adventure is about to begin anew. Searching for the "Phantom Takoyaki", the Parodius team stands out.

Are theyIs Tako going to repeat the same mistake again?

As stated above, gameplay is very similar to the Gradius series, with a few exceptions. For one, there is an impressive array of characters to choose from. Each one of these characters utilizes different weapons and abilities as you obtain power-ups. The second main difference is the addition of bell power-ups, from the TwinBee series. These bells act as one-time power-ups, allowing you to destroy every enemy on screen, fire huge beams of energy, etc.

The playable characters in this game include:

The music in Jikkyō Oshaberi Parodius is also unique. It ranges from a remix of the 70's disco song "That's the Way I Like It," to remixes of Bach, to sped-up versions of tunes from other Konami games. All of the songs are done in a unique style, with loud saw wave synths and fluctuating BPM. The music was produced by the Konami Kukeiha Club.

Jikkyō Oshaberi Parodius translates to something like "Chatting Parodius Live!". As the name implies, a large amount of voice samples are present in the game. As the player progresses, Japanese voiceovers provide information about how well the player is doing, what enemies they are fighting, etc.

The game also features extremely advanced graphics for the time period and system; most notable are the fully scalable 3D polygons present in one of the stages. These graphics are made possible by the inclusion of the SA-1 chip, a special graphics chip used in many games towards the latter part of the Super NES' lifespan.

A feature exclusive to the PlayStation and Sega Saturn version is the goal of collecting fairies (worth 10000 points each) hidden throughout each stage, getting 70 fairies unlocks Stage Select, getting another 70 fairies unlocks Dracula-kun and Kid-Dracula as playable characters. Other features (which can be enabled on the Options Menu) include changing the "OH!" power-up into a Slot Machine game that grants you bell power-ups depending on the color of the bells the slots stopped, adding "Accident" levels, small segments that randomly takes place once a stage ends and the ability to turn off the announcer during gameplay.

In addition to the standard game mode, they also include two Omake modes:

This game was ported for the PlayStation and Sega Saturn in 1996 with the title, Jikkyō Oshaberi Parodius ~forever with me~. This port not only added improved graphics and sound from the Super Famicom game, but some altered levels and bosses. Also added were several "Omake" stages and an unlockable Dracula-kun and Kid Dracula as a playable character. In a two-player game, both players can now choose to play simultaneously instead of just alternately in the Super Famicom game.

The game was also ported to the Sony PSP in 2007. One notable change was the first stage's music, "I Remember That!", which was an instrumental remix of "That's the Way (I Like It)" by K.C. and the Sunshine Band. It was replaced with "Brilliant 2U" by Naoki Maeda from Dance Dance Revolution to avoid copyright infringement. 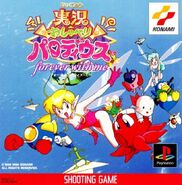 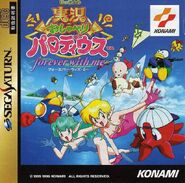 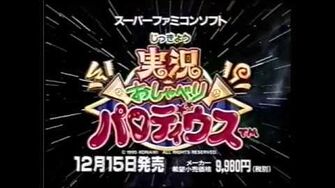