James Burton (ジェイムス・バートン, Jieimusu Bāton?) is the lead character in the MSX Nemesis series, and original pilot of the Vic Viper and Metalion fighter crafts.

James was born in 6641 in Gradius, being one of the few wreek survivors from the Northern Cross War, where he lost his parents while he was still 3 years old. In 6645, he and the other surviving wreeks are housed by the Imperial Government and enlisted in the Space Agency, but in 6653, at the age of 12, he leaves the agency and enlists into the Department of Defense, seeking to join the Imperial Space Air Force to exact revenge on the Bacterians who killed his parents.

He was enlisted in the war against Bacterian in 6658 and promoted to Major at the age of 17, and later joined the Battle for Antichthon in 6664, allied with Dr. Venom, Director General of the Space Agency and developer of the Vic Viper super spatiotemporal fighter.

He was promoted to Captain of the Imperial Space Air Force in 6663, and when Venom eventually began his attack on Gradius in 6666 with Bacterian's combined forces, James was sent on one final mission to stop him, now piloting the state-of-the-art super spatiotemporal fighter Metalion.

Due to his efforts in fighting the Bacterians and Venom, James was crowned Emperor Lars 18th. As Emperor, one of his most recognized actions was to reconstruct the seven planets affected by the war against Venom.

James eventually died in 6718 at the age of 77, and in the next year the Imperial government built the "James Hill" in his honor.

In 6809, Venom attempted to exact his final revenge against James, seeking to erase him from history by traveling back to 6644 and kidnapping him at a young age. His descendant, David Burton, saved history thanks to the help of three color encoded maps, and recovered the capsule James was kept prisoner in.

Artwork from the Gradius 2 manual. 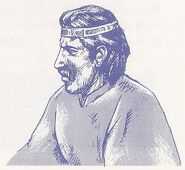 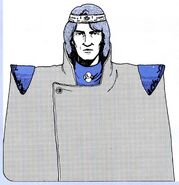 Lars XVIII in the GOFER no Yabou Episode 2 manual.

James Burton, as depicted in the Nemesis 2 intro.