Gradius Gaiden
Jade Knight (ジェイドナイト, Jeido Naito?) made its debut in Gradius Gaiden with Falchion β. Eponymously, every weapon this ship has is tinted green, including the options. Basically every Star Fighter has their uniquely colored options, including this one, this trend started in Salamander.

Its missile, the spread bomb is a carry-over from Gradius II. This ship has two different kinds of lasers available: Round and Pulse. The round laser, the most unusual weapon presented in this game, fires concentric rings of laser origination. This weapon is very powerful when is correctly used.

The pulse laser is a two or three pronged burst laser, similar to the twin laser in previous titles, this seems to be one of the weakest lasers in the game. 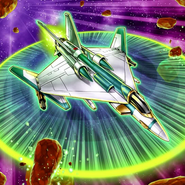