"Poison of Snake"
The Intruder (イントルーダ, Intorūda?) is a recurring boss in the Gradius series. It is a dragon-like space monster with a long and serpentine-like body which is completely engulfed in flames. It moves around by slithering through space, often tracing circular or undulating patterns.

The creature has become one of the most iconic and recognizable assets of the series, including its various spinoffs and diverse related media, and has made numerous cameo appearances in other Konami games, either as a guest enemy or as a special attack that can be used by the player (generally a very powerful one).

It is often considered to be the "Salamander" itself and appears prominently in artworks and/or its special attack is explicitly named as such in some games.

The Intruder is a fiery dragon-like creature which has made several appearances in the series and set the tradition of fire elemental creatures appearing as bosses, such as Phoenix and Volleone. It is also one of the few bosses in the series to get its own theme music, a piece called "Fire Dragon" which plays during its reappearance in the Gradius II's boss rush stage.

In the Japanese version of Life Force, the Intruder, like the stage it's in, has been recolored blue.

The Intruder will attempt to wrap himself around the player, occasionally breathing fire. In the original game, the Intruder's movements are fairly jerky and stiff, owing to limited programming of the era, but later games refined the programming to give it more fluid snakelike movement. In some games, the Intruder can physically crush the player with its body. Since it has relatively low health, however, this is somewhat unlikely.

In the NES version of Life Force, only its head ever appears. Here he has a very simplistic attack pattern, which consists of breathing fire in the player's general area. It moves its neck up and down to try and match the player's vertical position. Although its fireballs are quite large, the Intruder's health is very low and it will usually go down without being much of an issue.

It reappears in Gradius II, where it gains the ability of splitting into three at low health. This naturally greatly increases the difficulty of the boss, each head needing to be eliminated on their own.

Finally, in Gradius Gaiden, O.V.U.M. uses the image of the Intruder as a scare tactic against the player.

The Intruder appears in the first episode of the Salamander anime series. Its appearance is constantly teased throughout the episode, as it's shown freely moving around the Salamander planet and activating the Sharp Cross traps on its narrow tunnels. It finally makes a proper appearance at the end of the episode, protecting the Zelos Force and serving as the final enemy the heroes face. It proves to be a very strong foe, being impervious to all weapons, so Eddie Evans pulls a heroic sacrifice to destroy it from the inside. 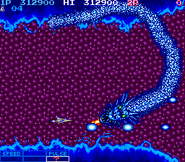 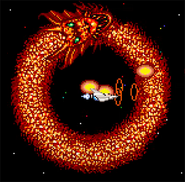 Intruder in the Salamander anime. 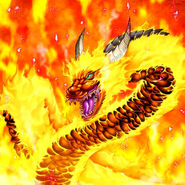 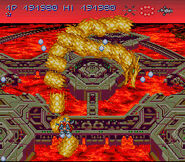 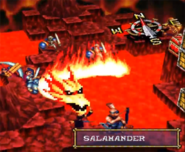