Hot Lips (ホットリップス, Hotto Rippusu?) is a recurring boss in the Parodius series.

Hot Lips is the 3rd level boss in Parodius Da! and the sub boss in stage 4 of the original Parodius. It later appeared in the Boss Gauntlet of Sexy Parodius. As the name suggests, Hot Lips is a group of eight lips.

The lips will occasionally blow a pair of sharp teeth which follow the player until destroyed, once all are defeated the player can leave, if all the lips are not defeated after the time runs out the remaining ones will run away (charges at the player in NES version) and the game will allow the player to still advance (also known as timed out), the statues in the background will appear shocked if all are defeated, if not they will smile.

In Sexy Parodius, Hot Lips returns. This time when four of the lips remain they will form a pair of giant lips. Hot Lips can blow up to more than 20 pairs of sharp teeth (Irebabas) at a time, making it hard to avoid. It will also charge at the player, but this can be avoided by moving when it licks its lips. In higher difficulties, it will fire more teeth that leave behind suicide bullets at shorter intervals. 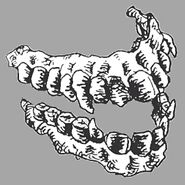 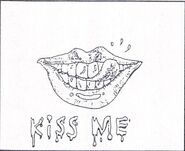