Hexion (ヘクシオン, Hekushion?) is a puzzle game developed and published by Konami for arcade on March 1992 in Japan. It features cameos of a few Konami mascots, such as Penta, Moai and TwinBee.

Hexion is a falling-blocks puzzle game, similar in concept to Tetris. While in Tetris the puzzle pieces were composed by square tiles, in Hexion they are composed by hexagonal tiles.

The game plays by the same rules of Tetris, with players having to move and rotate falling puzzle pieces to fit them at the bottom of the playing area in order to create lines of tiles which are then destroyed. Due to the hexagonal format of the tiles, lines in this game follow a zigzag pattern. The game is over when the tiles reach the top of the screen.

Upon starting the game, players can choose between playing a regular game, either alone or competing against a second player, or pick between three arena formats (normal, large and diagonal) for single player only. 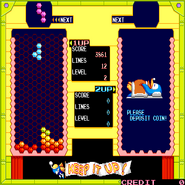 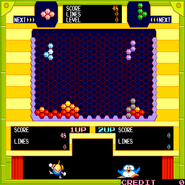 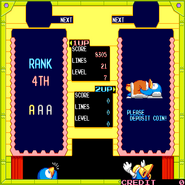 Retrieved from "https://gradius.fandom.com/wiki/Hexion?oldid=28110"
Community content is available under CC-BY-SA unless otherwise noted.