Grave (グレイブ, Gureibu?) is the second boss in Gradius Gaiden.

Grave is the harder of Gradius Gaiden's Stage 2 bosses. Take the upper path to fight it. It appears to be half of the Crab from Gradius II.

Grave's attack are quite random. When it appears, only the orb containing its core falls from the ceiling, making trash fall. It's body jumps up underneath the orb, joining the two together and making more trash rain down. After this, it can either fire a sweeping laser, which can be canceled by hitting it. It can also fire a volley of three heat seeking missiles, which can be destroyed. Or, it can jump, which makes MORE trash fall. Its core has a high amount of health, but that's probably just because you can only hit it once before it closes the orb again. After Grave dies, it falls apart, which makes more trash fall, which can kill you if you're not careful. 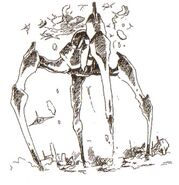 Concept art
Add a photo to this gallery

Retrieved from "https://gradius.fandom.com/wiki/Grave?oldid=28064"
Community content is available under CC-BY-SA unless otherwise noted.