Single player, two players
Gradius IV: Fukkatsu (グラディウスIV -復活-, Guradiusu IV -Fukkatsu-?, lit. "Gradius IV: Revival") is the fourth arcade installment in the Gradius series of scrolling shooter video games produced by Konami. It was preceded by Gradius III, released in 1989, although other non-numbered spinoffs had been released such as Gradius Gaiden. This title brings a considerable graphical upgrade, particularly with the use of colored lighting. In addition, there have been several additions and removals to the vaulted weapons system; specifically, the edit mode has been removed and an online ranking system was added.

The doomsday planet Bacterian has long been forgotten and Planet Gradius is enjoying a time of restored peace and prosperity. However their worst nightmare is about to become reality... again.... Suddenly, out of nowhere, a massive attack force appears, overwhelming the Gradius Defense Forces.

Just when things are looking hopeless, a lone fighter screams across the sky. The battle for freedom is joined once more.....

The core gameplay of Gradius IV remains relatively unchanged. However, several changes were made on the weapons system in the transition from Gradius III. First of all, the edit mode has been completely eliminated, as are the "Snake Option" (s.option), the "Reduce" shield type, and the seventh powerup category. The seventh powerup category was the one that was labeled "!" and would produce detrimental results, such as reducing the speed or eliminating the weapons of the ship.

In this game there are a total of six configurations, the first four of which are migrated from Gradius II. There two new configurations are as follows:

Configuration 5: The missile mode is a vertical mine that is released above and below the ship. After a short delay, the mines explode, yielding a large explosion. The double mode is the standard 45-degree angle split. The laser mode is a thin armor piercing round that can penetrate multiple enemies.

Configuration 6: The missile mode is the flying torpedo, which produces two missiles that fly forward in front of the ship. The double mode is the tailgun, seen in other configurations. The laser is the twin laser seen in Gradius III.

Starting a tradition that is continued in Gradius V, this game introduced an online-ranking system. After a player's game was over, a password was presented. This password, which was hashed scoring information, could be uploaded to a Konami website. This ability was only available in Japan, and was discontinued in August 27 of 1998. This was similarly done for the Gradius III and IV console release. Score recording was disabled approximately a year after its arcade brethren.

Note: Names in italics are unofficial. 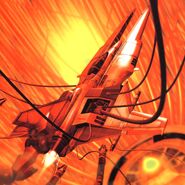