Not to be confused with Nemesis 2.

Gradius II never saw availability in North America until the release of Gradius Collection for the PlayStation Portable, instead, the Life Force conversion of Salamander was marketed as the sequel to Gradius.

Two years ago, the planet Gradius was suddenly attacked by a Bacterian invasion fleet. On the brink of defeat, Gradius launched its last hope, the hyper-space fighter Vic Viper. The Vic Viper drove deep into the heart of the enemy forces and destroyed the Bacterian stronghold, the Xaerous Fortress, and brought victory to Gradius.

But now, the Bacterian menace is again threatening the planet Gradius. This time, the attack is led by a new enemy — a special unit known as Gofer. The Gradius forces again look to their savior — the Vic Viper — to save them from annihilation.

Gradius II has kept the gameplay from the original game, but infused it with enhancements brought from the spin-off, Salamander, and the Japanese arcade release of Life Force. This is primarily evident in two of the weapons configurations that are selectable.

Gradius II also introduces two special stages, which would become famously recurring in the series and its spin-off, namely:

This game also marks the arrival of the Option Hunter, which like the two stages mentioned above, would also become a staple in the series.

Gradius II retains the Power Meter bar from Gradius, but now the player can choose between four different weapon configurations and progressions. All schemes have Speed-Up and Multiples (Options), but have differing 'Missile', 'Double', and 'Laser' weapons. Additionally, there are also two types of shielding to choose from: 'Shield' and 'Force Field'.

While the game was ported to home consoles at the time, none of them were released in the United States.

The game was first ported to Nintendo's Family Computer (or Famicom for short) in 1988. The game made use of the VRC4 (Video Resource Chip) mapper chip [1] which enhances the Famicom's video and audio capabilities. This port changed the stage orders, added and removed bosses, swapped or wrote new tracks (some still exclusive to this game) for some stages. Despite the fact that the Famicom versions of Gradius and Salamander (as Life Force) were localized for the NES, the Famicom version of Gradius II remained exclusive to Japan, likely due to the difficulty of converting a VRC4 game into MMC format.

The game was then ported in 1992 to the PC Engine Super CD-ROM². Unlike the NES port, this version is the more faithful to its arcade counterpart, the graphics remained unaltered and one additional stage was even added that is similar to both the temple stage of the NES version of Life Force and the first stage of Gradius III. Additionally, a sound test was added. It is worth mentioning that it was announced as an upcoming TurboDuo release by Turbo Technologies Inc. in 1992 but was cancelled with no given reason. Had it been released, North American Gradius fans would not have had to wait for Gradius Collection for the PSP or the Virtual Console release of this version.[2]

The MSX1 version of Gradius 2 (released as Nemesis 2 in the European market) was a completely original sequel produced specifically for the platform and unrelated to the arcade version. Portions of Gradius II were later re-used in Nemesis 3.

The arcade version of Gradius II was later re-released in the Japanese exclusive Gradius Deluxe Pack for the Sony PlayStation, Sega Saturn and Microsoft Windows in 1996, and for the first time a worldwide release on the Gradius Collection for the Sony PSP. It was also released on PlayStation 4 in 2016 and Nintendo Switch in 2020 as part of the Arcade Archives. It was also included in 2019 as part of Arcade Classics Anniversary Collection.

The TurboGrafx-16 port was released for the Wii's Virtual Console in North America on October 20, 2008 at a cost of 900 Wii Points. The same TurboGrafx-16 version was also included in the list of games available for the PC Engine CoreGrafx Mini in March 19, 2020 and is available in all regions.

Gradius II received generally positive to favorable reviews as the game look similar to predecessor but only add something to make the game different as it success the original in every-single-way. 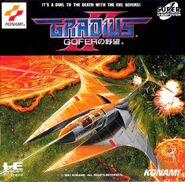 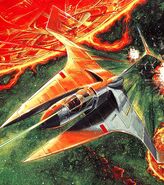