Single player
Gradius Galaxies, also known as Gradius Generation (グラディウスジェネレーション, Guradiusu Jenerēshon?) and Gradius Advance (Europe), is a horizontally-scrolling shooter handheld video game published by Konami in 2001. The game, released for the Game Boy Advance, is the only Gradius title to be available for the system.

It all began with a single meteorite impact.

Ramiles, the fifth planet in the peaceful and prosperous Gradius system, suddenly lapsed into silence. Moreover, communications ceased from all spacecraft navigating the region. The federal government of Gradius viewed the situation gravely and immediately commenced an investigation to shed light on the mystery.

Soon after, the startling truth was revealed.

Centuries before, Gradius had destroyed the fortress planet of its enemy, the Bacterions, in a final, decisive battle. As a result, countless planetary fragments embedded with self-breeding DNA program of an enemy biological weapon were scattered into space. One of those fragments entered into a wide-range orbit and, after 400 years, returned to the Gradius system as a meteorite. After impacting on Ramiles, the DNA program in the meteorite immediately activated itself. The planet was subdued in mere moments.

With their planet in flames, the people of Ramiles —powerless to counterattack— were crushed with despair. Then one day, an old man looked up to the sky. Reflected in his eyes was the white vapor trail of a combat ship in flight traced against a crimson-dyed sky. The old man was convinced that the ship was the Vic Viper, a super-spatial temporal fighter he had heard of in legend as a child. Seeing this, a faint hope glowed within the old man's heart.

Now, as the people's distant memories return from the ashes, a new battle is about to begin...

Gradius Galaxies plays almost identically to other titles in the series. The player takes control of the Vic Viper spacecraft attacking onslaughts of enemies. All of the usual Gradius staples are present: Moais, an unguarded final boss, and the Power Meter. The weapons system remains mostly unchanged as the configurations available are identical to Gradius III, with the exception of a weapon edit mode. There are four different types of weapons configurations: Balanced (traditional Gradius), Wide Area (Salamander), power, and Air-to-Ground. Each configuration is differentiated by a palette swap for Vic Viper. Unlike Gradius III, there are only two shield options: Shield and Force Field. In addition, the S.Option ("snake option") is not present; however, the player can choose to have the computer assign weapon power-ups automatically or leave it manual. New to Galaxies is the feature to resume the game from any completed stages, marked by checkpoints.

The Japanese version of the game featured an exclusive game play mode called Challenge. (this mode is entirely absent from the U.S. and European versions) Challenge must be unlocked by completing the main game, and consists of several difficult stages that test the player's skills. 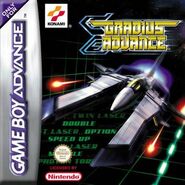