Single player, two players
Gradius Gaiden (グラディウス外伝, Guradiusu Gaiden?) is a horizontal scrolling shooter video game produced by Konami and released in Japan on August 28, 1997. It is the first Gradius-named title to incorporate 3D graphics. The soundtrack for the game was composed by Norikazu Miura (credited as Nories Miura).

At the end of the third Bacterion war, the planet Gradius was freed from the terror of obliteration as the core of the Bacterion forces was destroyed.

Several hundred cycles later... The people of Gradius rebuilt their civilization to new heights of prosperity during a long era of peace, but the nightmare returned once more. Long feared as the “Expanse of Darkness,” the Black Nebula was an area of mystery and terror, and all were forbidden to pass near it. And not long after an exploration vessel disappeared in the nebula, nearby planets and colonies began falling prey to attacks by unknown forces.

The military forces of Gradius, accustomed to the long era of peace, suffered defeat after defeat, and the unknown invasion force soon loomed over the planet Gradius itself. The military commanders of Gradius, out of options, played their last card — a strike by four new hyper-space fighters at the heart of the enemy invasion, the center of the Black Nebula. Four pairs of wings now head for the inky depths of the galaxy, with the fate of Gradius resting on their shoulders.

The core gameplay of Gradius Gaiden remains relatively unchanged. However, two new ships are made available whose weapon configurations are new to the series. Moreover, several changes were made on the weapons system. The chargeable E. Laser, the Reduce size shield, option types, are all items that have been removed in the transition from Gradius III to this title. However, the player can select from several ships, each with a unique weapon configuration. In a slight carryover from Salamander 2, Missile, Double and Laser weapons can be additionally powered up one level. These power-ups are permanent until the player is destroyed, even if he switches between the Double and Laser powerups. There are two new types of shield. One is called 'Guard', which attaches to the top and bottom of the craft and renders the player immune to physical obstacle collisions. The other is called 'Limit' and gives complete invulnerability and lasts for three seconds. The player can re-arrange the power-ups on the power-up gauge before gameplay begins as well as change the default arrangement on the Options menu. The option whether to use a male or female announcer is also on the Options menu.

The difficulty level can also be adjusted from 'easiest' up to 'hardest', for a total of seven difficulty levels. On the easier difficulties, the more troublesome boss attacks are removed and the number of enemies on-screen is reduced.

A level select option (which allows you to start on any stage you've been to, as well as the loop the stage is in) and free play mode (which gives you unlimited credits) can be unlocked by beating the game on normal mode without using any continues and by accumulating at least 10 hours of game time, respectively.

Jade Knight: Eponymously, every weapon this ship has is tinted green, including the options.

Its missile, the spread bomb is a carry-over from Gradius II. This ship has two different kinds of lasers available: round and pulse.

The round laser, the most unusual weapon presented in this game, fires concentric rings of laser origination. The pulse laser is a two or three pronged burst laser, similar to the twin laser in previous titles.

The Falchion has two way missile called a rolling missile, which tumbles to the ground where it splits and shoots both left and right.

It also has a three-way limited range shot called Auto-Aiming, that fires a second shot within the angles of 0 to 180.

Its laser weapon is the gravity bullet, which is a newcomer to the Gradius series but is present in several earlier Parodius titles. It is based on the Spread Gun that is yielded by Pentaro in Parodius Da! and every title afterward.

Gradius Gaiden never initially saw availability outside of Japan (in which it was released three times, initial release, Playstation The Best and PS One Books) until the release of the PlayStation Portable compilation, Gradius Collection, in 2006 for North America and PAL regions. For the PSP version, cooperative multiplayer (in which both players play at the same time, as in the Parodius and Salamander series) was removed and suffers from lag at certain parts. 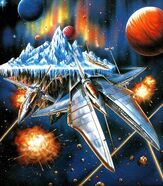