1 or 2 players
Gradius (グラディウス, Guradiusu?) is a horizontally-scrolling shoot 'em up released by Konami in 1985 for video arcades. It was released outside Japan under the title of Nemesis,[1] although later international releases included in compilations, such as Gradius Collection for the PlayStation Portable and Konami Classics Series: Arcade Hits for the Nintendo DS, would retain the Gradius name.

Gradius has the distinction of popularizing a weapon selection bar called "Power Meter", based upon collecting Power Capsules to 'purchase' additional weapons. The game was ported to many systems, most notably the Nintendo Entertainment System (with this version also appearing on the Wii's Virtual Console).

Across the galaxy, there exists a distant planet known as Gradius. A lush, beautiful world, the planet Gradius has thrived in peace for many years. Unfortunately, that peaceful existence came to a sudden end when Gradius became the target of a subspace star cluster known as Bacterian. Facing inevitable defeat before their ruthless invaders, Gradius has pinned its last hopes on the hyper-space fighter Vic Viper.

Its target is the enemy fortress, Xaerous. The only way to put an end to the war is to plunge deep through the enemy forces and destroy its very core. And so, the Vic Viper takes off, far into the depths of space!

The player controls the trans-dimensional spaceship Vic Viper, and must battle waves of enemies through various different environments.

The game became synonymous with the phrase, "Destroy the core!", as the standard of boss battles in the Gradius series involved combat with a giant craft, in the center of which would be situated one to several blue colored spheres. These bosses would be designed in such a way that there would be a straight passage from the exterior of the giant craft which leads directly to one of these cores. The player must fire shots into this passage whilst avoiding attack patterns from weapon emplacements on the body of the boss. However, small but destructible walls are situated in this passage, impeding the bullet shots from damaging the core, and must be whittled away by repeated well-placed shots. In a way, these tiny walls represent the boss' shielding gauge until its core is finally vulnerable to attack. Some bosses have the ability to regenerate these walls. When the core has sustained enough hits, it usually changes color from blue to red, indicating that it is in critical condition and its destruction is imminent. Upon the destruction of a core, a piece of the boss may be put out of commission, seeing that it is no longer powered by a core, or if all of the cores are destroyed, the entire boss is defeated and explodes satisfyingly. Note that these cores are not present on the more organic bosses of Gradius. Such bosses have weak spots in places such as a mouth, head or eye.

The name "Gradius" refers to the human-inhabited planet in which the Vic Viper is from (also known as planet Nemesis), and is not a mistranslation of the word "gladius" (cf. Engrish) as one might assume.

When gameplay begins, the Vic Viper is relatively slow and has only a weak gun. This level of capability is generally insufficient for engaging enemies, but the Vic Viper can gain greater capabilities by collecting and using power-up items.

While most arcade games utilize distinct power up-items that each correspond to a specific effect on the player character, Gradius has a single power-up item. The effect of this power-up item is to advance the currently selected item in a power-up menu that appears at the bottom of the screen. When the desired power-up is highlighted, the player can obtain it by pressing the power-up button, returning the menu to its initial state in which no power-up is highlighted.

In most ports of Gradius, the player starts with 3 lives and can get more starting 30,000 points and then every 80,000 points after that.

Home console and portable versions of Gradius spawned the now-legendary Konami Code, considered by some to be one of the defining elements of Gradius. The code, when entered while the game is paused, grants the player most of the available power ups.

Gradius was also converted for the Nintendo VS. series arcade platform under the name VS. Gradius. It is identical to the NES version, but includes no cheat codes and allows the player to continue indefinitely.

The arcade version was also released on 2015 on the PlayStation 4 and later on Nintendo Switch as part of the Arcade Archives, and again in 2019 for both systems as well as Xbox One and PC as part of the Arcade Classics Anniversary Collection. The North American and Japanese versions can be found on both, though only the former includes the European version, also titled Nemesis. The MSX version was included in Konami Game Collection Vol.3 in 1989 for the same support, while the PC Engine version of Gradius was included in the list of games available for the TurboGrafx-16 Mini in March 19, 2020 and is available in all regions. 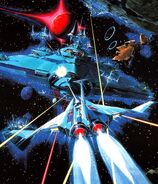 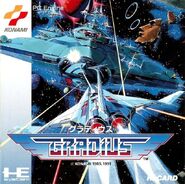