Gokujō Parodius! ~Kako no Eikō o Motomete~ (極上パロディウス ～過去の栄光を求めて～?, lit. "Fantastic Parodius! ~Pursue the Glory of the Past~"), released in Europe as Fantastic Journey, is a side-scrolling shooter arcade game and the third title in the Parodius series produced by Konami. Like the rest of the series, it is a parody of the Gradius series and other Konami games.

Overall, the gameplay is identical to that of its predecessor, Parodius Da!, with several new characters to choose from. Also new is that if you play a two-player game, the second player will have a different set of characters to select. They are clones of the first player characters, except with different names and slightly altered sprites or changed color palettes.

In the Parodius series, starting with Gokujō Parodius!, the Power Meter was changed from a bar with the weapon names as text to a bar with pictures indicating the power-ups. The borders of each icon determine the gameplay type chosen, red for auto, yellow for semi-auto, and blue for manual. As this kind of power meter is shorter, two separate power meters appear onscreen on a two player game.

When playing a two player game, shooting the other character enough times will cause it to get angry and fire shots in all directions for a short time. In the updated ports of Jikkyō Oshaberi Parodius, this can be turned on or off in the options screen. Also, when a player has pressed continue, the game stops as the player chooses his/her character and the game type.

Gokujō Parodius! was ported to the Super Famicom in 1994. The only significant difference between the console and the arcade version was added characters: Goemon/Ebisumaru from Ganbare Goemon, Dracula-kun/Kid-D from Kid Dracula, and Upa and Rupa from Bio Miracle Bokutte Upa.

Weapon differences in the SNES release

Hikaru and Akane get the Tailgun, the Boomerang Shot from Thunder Cross, another shooter game by Konami, and a Shield instead of the Spread Bomb, the Carrot Shot and a force field called Star that they get in the arcade version, as well as on the Deluxe Pack released for the PlayStation and Sega Saturn. Similarly, Mambo and Samba are given Homing Missiles, the Reflect Shot (which gives them two options when chosen), Grade Up and a Shield instead of the Bubble Missile, the Control Laser, Search Laser and a force field known as Barrier.

It was also released on mobile phones and included in Parodius Portable (although in the latter release some of the songs were removed due to copyright issues).

Key art
Add a photo to this gallery 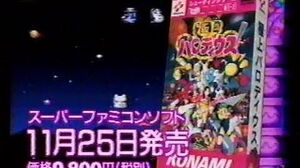 Retrieved from "https://gradius.fandom.com/wiki/Gokuj%C5%8D_Parodius!_%7EKako_no_Eik%C5%8D_o_Motomete%7E?oldid=28822"
Community content is available under CC-BY-SA unless otherwise noted.