They are voiced by Sumi Shimamoto.

Judging by the game's in-game scripts and illustration data, it seems like the Gofer Sisters are actually the phantom of Gofer himself divided into two pieces: L.B. for "Left Brain" and R.B. for "Right Brain".

In the development stage of the game, there was some voice clips that the sisters calling Gofer as their father, but they are gone in the final version of the game.

They make two appearances in this game: as the boss of Stage 2 and the final stage. In Stage 2, they pilot Riding Cores with which they attack the player in direct combat. When damaged enough, they'll will call out and attach to a mechanical Golem known as Eyegol.

In the last stage, they pilot the Odin Core, the final boss of the Boss Rush.

The duo makes their comeback appearance in Stage 2 as the pilots of Tetran, attacking the Angel Squadron in the middle of the city by first going through a tunnel and then speeding down a street, crashing through an open building before speeding away again while taunting the player in their wake. 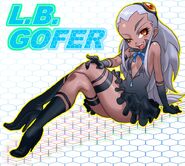 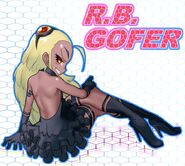 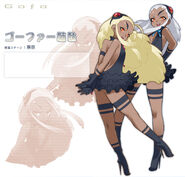 Add a photo to this gallery
﻿

Retrieved from "https://gradius.fandom.com/wiki/Gofer_Sisters?oldid=25246"
Community content is available under CC-BY-SA unless otherwise noted.