When Gofer was destroyed in Gradius II, a piece of him landed on a distant planet and then mutated into a large battleship similar to the Xaerous Fortress from Gradius. It then changed its form into his new form shown in Gradius IV. He claims that every piece of him spread across the universe will reborn as copy of himself when he is destroyed again.

In Gradius II Arcade and Gradius IV, Gofer does nothing, but in Gradius II NES and Nemesis 3, he can spew energy balls or lightning bolts from his mouth.

Gofer appear in the third and final episode of the Salamander anime series. Here, Gofer is a gigantic construct of flesh created by Paula, though since he was still incomplete he appears in a demented state. Paula kidnaps Stephanie intending to turn her into a Cyber Brain and fuse it with Gofer, so that he would become the Bacterian's ultimate weapon. After Dan and Lord British rescue Stephanie, Paula fuses herself with Gofer, as the two transform into the Phoenix.

Although Gofer may be a part of Bacterion, the Salamander anime implies that Gofer is an organic weapon made by Bacterian, which has the ability to grow up and change the whole universe into the reign of Bacterians, gathering the intelligence from other creatures. However, currently the anime trilogy is considered as non-canon in the Gradius saga. 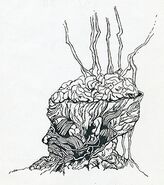 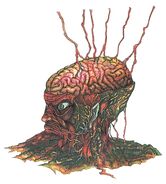 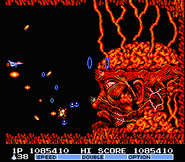 Gofer in the Salamander anime 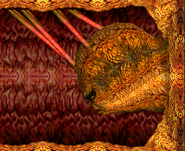 Gofer in Gradius IV
Add a photo to this gallery
﻿

Retrieved from "https://gradius.fandom.com/wiki/Gofer?oldid=24612"
Community content is available under CC-BY-SA unless otherwise noted.