Goemon (ゴエモン?) is the star protagonist of the Ganbare Goemon series. A hot-blooded man from Edo, he has a strong sense of justice and will right whatever wrong there is in front of him. He is loosely based on Ishikawa Goemon, an outlaw hero from medieval Japan who stole from the rich to give to the poor.

Renamed "Kid Ying" in the North American release of The Legend of the Mystical Ninja for the Super NES, in the North American releases of Mystical Ninja Starring Goemon and Goemon's Great Adventure his name is correctly translated to "Goemon". He primarily uses a variety of kiseru (smoking pipes) as his weapon of choice. In the future, his descendant is referred to by the same name.

He has appeared in three games from the Parodius series, as well as several crossovers from Konami's Wai Wai series, which commonly also include characters from Gradius and Parodius.

Emon • 5, a character from the original Otomedius, is based on him.

"Hot-blooded man from Edo Japan" Although in the anime he is given a more sweet caring outlook, he is very hot-blooded in the games. Always itching for a fight. He is known for his strong sense of justice, being the noble thief that he is. In early games, he is portrayed as being more chivalrous and does not smile very often compared to later games. Beginning with The Legend of the Mystical Ninja, he is portrayed as more of a hero, defeating evil threats to Edo instead of stealing from the rich. Although he originally had many samurai and ninjas chasing him (due to a large bounty on his head), now his enemies are more often the main villain's henchmen. The Lord and Princess Yuki now see him in a more positive way. In the Nintendo 64 games, many people that resemble his former enemies act in a friendly way to him. This change can be seen in Bōken Jidai Katsugeki Goemon, where he is not a thief at all.

Goemon also has cards in the Yu-Gi-Oh! trading card game. This character's card is "Goe Goe the Gallant Ninja", but why "Goemon" was changed to "Goe Goe" is unknown. 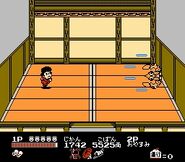 Goemon Compact, a boss from Jikkyō Oshaberi Parodius based on Goemon 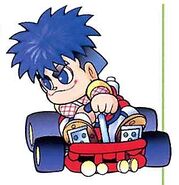