Gigantic (ギガンティック, Gigantikku?) is the third boss in Gradius NEO.

A core flagship that leads the armada you combat in the third stage. It also appears as Gigantic Mk. II in Gradius NEO Imperial.

Gigantic's two attacks consist of launching two homing missiles, one from each shell, and a giant beam from a barrier-less core.

Gigantic will start out by flying in from above, then backing in from the middle, and start shooting missiles. It will occasionally open the shells and fire a gigantic beam, then close back up. This is the entirety of its attack methods. You must defeat him by destroying his shell, then firing at the armed core. 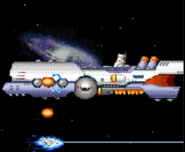 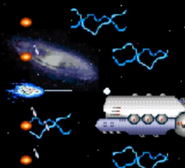 Force Viper faces the Bow of the Gigantic. 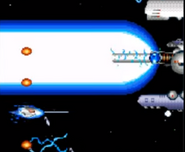 Gigantic unleashes a gigantic beam.
Add a photo to this gallery
Retrieved from "https://gradius.fandom.com/wiki/Gigantic?oldid=30598"
Community content is available under CC-BY-SA unless otherwise noted.