Giga (ギーガ, Gīga?) is a boss in the Gradius series.

Giga is a large skull based creature, whose abilities differ greatly in the two games he's featured in. His weak point is the mouth. 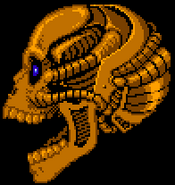 Giga in the Salamander anime.