Gaw (ガウ?) is a recurring boss in the Gradius series.

Gaw is a sprite edit of Death made for the game Life Force. The boss would later appear in groups at the start of future games bio levels as common enemy.

Gaw's attacks are the same as Death's, but he shoots out eyes instead of cores. When you destroy the "mouth piece", he starts to fire rapid volleys of red lasers. Later games have Gaw firing red lasers akin to Big Core. Gradius V, however, had Gaw retain his old attack patterns of shooting mini-eyes, and when the mouthpiece destroyed, firing volleys of red lasers. 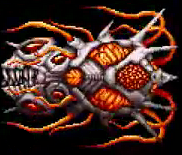 Gaw in Gradius V.
Add a photo to this gallery

Retrieved from "https://gradius.fandom.com/wiki/Gaw?oldid=33090"
Community content is available under CC-BY-SA unless otherwise noted.