Foss (フォス, Fosu?) is an enemy in the Gradius series.

Another formation enemy; Fosses move in snake-like waves, homing right into the Vic Viper, somewhat like Rugals. Destroying the entire formation will cause a capsule to drop from the last one. 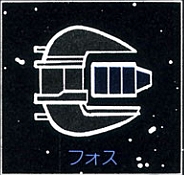 Foss Mk II in Salamander
Add a photo to this gallery

Retrieved from "https://gradius.fandom.com/wiki/Foss?oldid=29156"
Community content is available under CC-BY-SA unless otherwise noted.