Esmeralda is a third year student and is in the same class as Diol Twee, although they have become arch-rivals. She's a formal businesslike tactician and weapons expert.

Like Erul Tron, Esmeralda is a Gradian, along with Poini Coon, her wingwoman.

She's a reference to Gradius Gaiden and pilots the Jade Knight Riding Viper.

Esmeralda is suitable for players of all levels. As a weapons expert, she's able to use all weapons in the game that are not exclusive to other pilots. The movement of her Snake Options —which line up in the direction you were moving once you stop— takes an adjustment period. Her Round Laser —nerfed somewhat in the balance patch— easily destroys enemies around you. Her Pulse Laser acts like the Twin Laser, but is not limited to five shots on the screen at a time, is faster, is composed of three shots, and when powered-up it spreads out somewhat after a certain distance. The weapon is also no longer broken like it was in Otomedius Gorgeous, but it's still a very good weapon. Esmeralda's Platonic Break is Ring Laser which sends out a pair of gyro-connected laser rings across the screen twice. 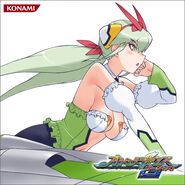 Retrieved from "https://gradius.fandom.com/wiki/Esmeralda?oldid=24496"
Community content is available under CC-BY-SA unless otherwise noted.