Emon • 5 (エモン • 5?) is one of the first characters presented in the original Otomedius, and the only male character of the game.

He's based on Goemon, the main character of the Ganbare Goemon series. He pilots the Xel Viper.

Emon • 5 was replaced by Arnval after he went kicked out. He also shares movesets with Arnval. However, his wingwoman, Emon • 8, refuses to take avenge with the G Organization due of his missing appearance in the sequel.

He was voiced by Daisuke Namikawa. 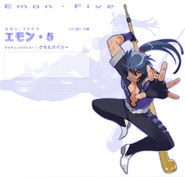 Retrieved from "https://gradius.fandom.com/wiki/Emon_%E2%80%A2_5?oldid=26489"
Community content is available under CC-BY-SA unless otherwise noted.