The boss is a large bald eagle dressed in Sam's clothing and is a parody of the Phoenix boss, although it features a different set of attacks.

It later showed up in the Boss Rush stage of Sexy Parodius. A smaller version also appeared in Gokujō Parodius! and in the Special Stage of Sexy Parodius as a recurring enemy. These enemies drop either 4 Power Capsules or 5 Bells when defeated, depending on their color of their hat's star stripe. Blue-hatted ones are more common mostly, while the green ones appear in the special stage or before some bosses, if the player has died in the checkpoint of the boss.

Certain ports of the game replaced the bosses' graphics with something less controversial, by making the eagle almost green in whole, much to censor the character parody intentions. It's weak point is the head, but it can be hit only when he is not attacking.

Eagle Eagle Sabnosuke has mostly the same attack pattern in all its appearances. Unlike the original boss, the Eagle will fly around the screen, as opposed to warping, removing what some viewed as a unfair attack.

Sabnosuke's main attack is to release a randomized spread of feathers, although in the NES version these are aimed towards the player, and move very slowly. It will also fire a volley of Ripple Lasers from its beak, which, unlike the fireballs of the Phoenix, cannot be destroyed. In the NES version these take up a very large portion of the screen. 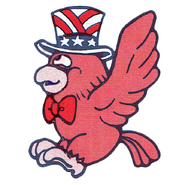 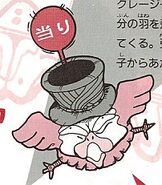 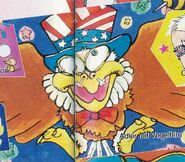 When defeated, the explosion burns its feathers and clothes off. 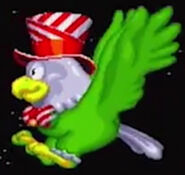 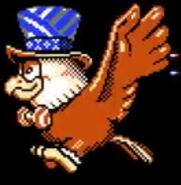 Eagle Eagle Sabnosuke in the NES/Famicon versions Of Parodius Da!