Diol Twee (ジオール・トゥイー, Dioru Tui?) is one of the main characters of the Otomedius series and a pilot of the Serenity Viper based on Xexex's Flintlock.

A third year student and the closest to being an adult in the cast, Diol Twee is the squadron's leader. Although firm, she has a sisterly kindness to her approach on leadership most especially Anoa and Tron. She seems to be bonded to the Flint, an organic component of her otherwise artificial Serenity Viper.

Diol Twee is an intermediate-level character. Her three Flint units are the new form of the previous Lock Options from Otomedius Gorgeous. They behave like normal options when not shooting, and lock into place when you shoot. Her Platonic Break fires out three very large flint tentacles like Xexex's Flintlock. 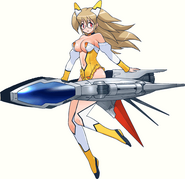 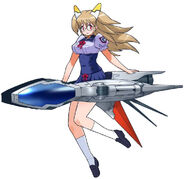 Retrieved from "https://gradius.fandom.com/wiki/Diol_Twee?oldid=27248"
Community content is available under CC-BY-SA unless otherwise noted.