Death MK II (デスMk-II?) is a recurring boss in the Gradius series.

Death MK II is the boss of stage 4 of Gradius II. He also appeared in the Gradius III boss rush and was also a junk boss in Gradius Gaiden stage Requiem for Revengers, serving a major role in the boss rush as DeathDouble. This one started the "SURPRISE!" second part Death is well known for.

In Gradius Gaiden as DeathDouble, the laser/missile roles are reversed. The lasers are the first phase then the missiles as the doors are destroyed.

The hatch is similar to the enemy Mother and Child, same as Death MK-I. 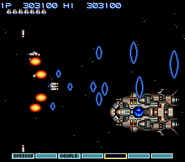 Death MK II in Gradius III SNES.
Add a photo to this gallery

Retrieved from "https://gradius.fandom.com/wiki/Death_MK_II?oldid=26497"
Community content is available under CC-BY-SA unless otherwise noted.