Death Hand (デスハンド, Desu Hando?) is a recurring enemy in the Salamander and Gradius series.

Death Hand was introduced into the series in Salamander, appearing in the Bionic Germ stage. It is an organic formation that hatches from a pink growth attached to either the ground or ceiling, and which has three claws on its end, resembling a hand.

The creature will move its "arm" toward the Vic Viper's direction and try to grab it, although it lacks the ability to extend beyond a determined length or fire. They're usually killed by shooting the different colored segment along the arm.

The Ropers introduced in Gradius II, and further variations, therein are invincible, although shooting them will push them back.

These enemies also make an appearance in the Salamander anime series. 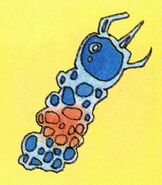 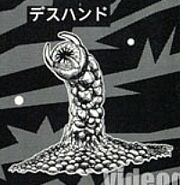 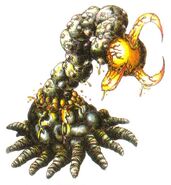 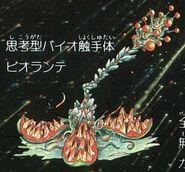 Biorante
Add a photo to this gallery

Retrieved from "https://gradius.fandom.com/wiki/Death_Hand?oldid=29601"
Community content is available under CC-BY-SA unless otherwise noted.