The Parasite Core part of DeathDouble really has no background, while the two Deaths (unofficially called Death MK 2.5) originate from Gradius II. The only difference is that their attacks are reversed. It supports the second boss of the Boss Rush stage in Gradius Gaiden.

First, the two Deaths will appear on screen, firing their lasers. If you stay in the middle of the screen, you won't be hit. They then support the Parasite Core by trapping you between the lasers, forcing some pretty risky maneuvers to dodge the energy shots the Parasite Core fires. After the Parasite Core dies, the 2 Deaths will attack you just like in Gradius II, only backwards (Laser first, then missiles). The missiles home in slightly on loop 2 and up.

DeathDouble adds one more move if the player choose to play Loop 2+ after the Parasite Core is destroyed, it will fire a stream of lasers. After that, it will fire missiles that follow your direction. 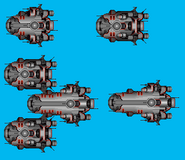