"Nightmare at the End of Century" (Battle B)
"Revibe" (Final Battle)

She is voiced by Kanemoto Hisako.

Dark Force is a Bacterian super weapon created by the Gofer Sisters –presumably after the events of Gradius Galaxies by collecting and using the remnants of that incarnation of Bacterian– as part of their campaign against the G Organization. Her design is intended to crush Earth's defenses and obliterate the organization itself. Even though she is just a weapon, the Sisters treat her with great respect and equality, as they recognize she might turn against the Bacterians if she feels unhappy.

After chanting and talking during Stage 5, Dark Force first appears in the beginning of Stage 6, where she destroys the Gradian fleet and Dr. Venom along with them. Realizing that the Angel Squadron is no match for Dark Force's immense and even godly power, Operetta sends the Angels back in time to destroy Dark Force at her larval stage (this action is a clear parallel to the journey of David Burton in Nemesis 3).

Dark Force pilots the Black Viper in her first battle inside the Bacterian mothership. Her ship is armed with Laser, Ripple, Flying Torpedo, and Vulcan, but has no Options. After she's defeated, she escapes and transforms into the Death Bringer, the true final boss.

When playing Story Mode on Expert, she also appears as the boss of Stage 8, the hidden final stage. Encountering her in Earth's atmosphere, all she does is send out Fans and fire three bullets every few seconds until the player finishes her. 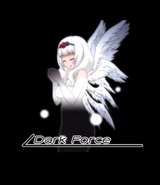 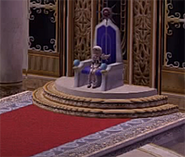 Dark Force in the final battle 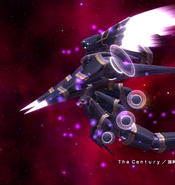 Retrieved from "https://gradius.fandom.com/wiki/Dark_Force_(Otomedius)?oldid=29690"
Community content is available under CC-BY-SA unless otherwise noted.