Crystal Golem is the third boss fought in the Game Boy port of Parodius Da!, and is exclusive to that version of the game.

It is a parody of the popular Golem boss and features a similar attack pattern.

Much like the boss it's based off, the Crystal Golem will follow the player around the battlefield, slowly moving its arms to intercept them. Its entire body is vulnerable, and should it be hit, it will be bounced back a short distance.

Its arms shrink in size and it now wields a traditional Japanese fan. It continues to follow the player around the area, but now with shorter arms, making the Crystal Golem easier to avoid. However, it now has the additional power to summon tu-tu wearing penguins to assist it, which raise from the water and glide to the left of the screen. These can be destroyed.

On easier difficulties, it does not summon the penguins, making this phase very easy. 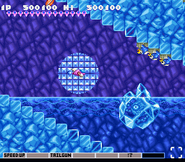 Crystal Golem in Parodius Da! (SNES)
Add a photo to this gallery

Retrieved from "https://gradius.fandom.com/wiki/Crystal_Golem?oldid=28221"
Community content is available under CC-BY-SA unless otherwise noted.