Crystal Core is a crystalline Core surrounded in ice. It appears in Gradius II as the boss of the crystal stage and in Gradius III as part of the Boss Rush. It's also a junked boss in Gradius Gaiden stage 2. This is one of the more interesting looking bosses, as it has four orange and blue barriers and one Blue core.

Crystal Core attacks by waving its tentacles while shooting blue small fireballs every 20% of a second from them and fires two medium-large standard Core defense lasers every second. The tentacles block all shots and cannot be destroyed. Eventually, Crystal Core will close up its tentacles to shield the core and then release a volley of 14 lasers every 20% of a second while moving up or down, then resume normal attacking. In Gradius Gaiden, the Core defense lasers are much thinner. 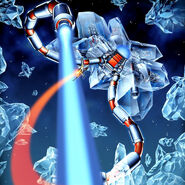 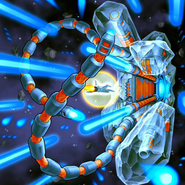 Crystal Core as seen in the Yu-Gi-Oh! card "Safe Zone"

Crystal Core's appearance in Yu-Gi-Oh! GX
Add a photo to this gallery

Retrieved from "https://gradius.fandom.com/wiki/Crystal_Core?oldid=27857"
Community content is available under CC-BY-SA unless otherwise noted.