Nemesis (GB)
Crawler (クロウラー, Kurourā?) is the boss of Stage 2 in the Game Boy version of Nemesis.

At the start of the battle, Crawler will fire vector lasers, which grow in size as they reach the left of the screen. It will also release smaller enemies when it has finished firing. It will eventually attempt to enclose the player in by moving forward, during this time it will continue to release small creatures from its core and move rapidly up and down the screen. Its weak spot is the core itself. 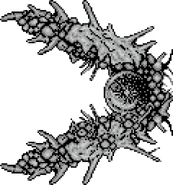