Crab (クラブ?) is a boss in Gradius II and Solar Assault.

Crab is the Gradius II version of Shadow Dancer. In Gradius II arcade, Crab is indestructible, however, in the NES version the player can destroy it. It is also the penultimate boss of Gradius II NES, while being an obstacle in the arcade version.

Crab just walks around, hoping to step on you with one of it's six sharp legs. The only real danger is the Duckers that constantly walk in. You need to shoot the body of the boss in order to kill it. In Gradius II NES it has a relatively low amount of health. 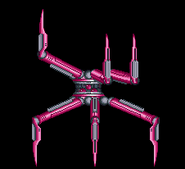 Crab in Gradius II NES.
Add a photo to this gallery
Retrieved from "https://gradius.fandom.com/wiki/Crab?oldid=24672"
Community content is available under CC-BY-SA unless otherwise noted.