Covered Core MK II has a drastically different design compared to the original Covered Core. It also sets the record for most cores on a boss. It can have anywhere from 5 to 14 cores, depending on difficulty/loops.

This time, there are four main shields which eventually rotate while the cores themselves also rotate. The whole ship slowly moves around while shooting many missiles and lasers.

Unlike the original Covered Core, the missiles spew out from each of the shields in a straight line, eventually flooding the area around you. These missiles can be destroyed, but some of them have special attacks when destroyed. Those with blue thrust are normal, pink ones shoot a bullet spread toward you, and yellow ones are a sunburst bullet spread.

In addition to the missiles, the shields are armed with lasers that progressively increase in number as the shields rotate faster. Eventually, the shields will stop spinning and return to their default positions. If you are skilled enough, you can enter the area where the cores are and take them out that way since your hit area is tiny. This is much easier to do on lower difficulties. In Otomedius, this tactic is impossible since the player's hitbox is much larger than in Gradius V. However, some characters will be able to take out this boss even easier by using the powerful "Dramatic Burst" attack. 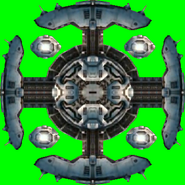 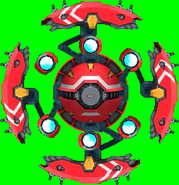 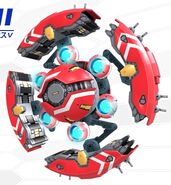