Choking Weed (ブロッティング・ウィード, Burottingu U~īdo?, lit. "Bloating Weed") is the boss of Stage 8 in the arcade version of Gradius III, and Stage 6 in the Super NES version of the game, where it's known as Bulbous.

Choking Weed attacks by firing triads of bullets in a spreading manner from the two small vines protruding from its stem, and also by sucking-in air with great force in an attempt to inhale and crush the Vic Viper; however, this attack also leaves its inner core the most vulnerable. Care should be taken as it both sucks-in air and fires bullet spores at the same time, which in conjunction can make it difficult for the player to maneuver through.

In the arcade version, the small plants firing the bullet spores can be destroyed, although they regenerate in time. Also, two additional, larger vines appear surrounding the core, which periodically open and close in order to protect it and shoot triads of bullets as well. These are absent in the Super NES port.

It's strongly recommended to use more than one Speed Up when fighting this boss in order to make it easier to dodge the bullets while being pulled in. 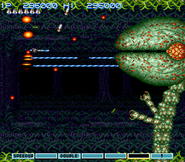