"The Final Enemy"
Chichibinta Rika (ちちびんたリカ?) is a recurring midboss in the Parodius series.

She is a parody of the Shadow Dancer, appearing as a giant Las Vegas showgirl.

Rika's first appearance shows her taking up a large portion of the screen. It is impossible to defeat her, so she must be dodged by slipping in between her legs and arms, moving only when she makes an opening for the player to move. She will then leave the player alone after a minute or so of this.

Rika returns two times taller than in Parodius Da! and her sprite is actually too large to fit the screen entirely. She still must be avoided, but she does have a nasty surprise waiting: wait too long and she will drop onto the player, revealing the top half of her body. She is accompanied by penguin enemies. As in her previous appearance, she will leave after a few minutes.

This time Rika can run across the screen, but she still utilizes her normal attack pattern. Once again, she will leave after a few minutes. 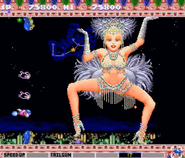 Chichibinta Rika in the Super Famicom port of Parodius Da!