The Cat Battleship (ネコ戦艦, Neko Senkan?) is the Sub-Boss of Stage 1 in Parodius Da!.

As its name suggests, it is a Battleship with a Cat's head. The cat resurfaced in later games, once upgraded into a Submarine, and later becoming a fully fledged boss as a train in it's own right.

It is manned by several Penguins and is fairly heavily armed. It's weakpoint is the head and does not have many hitpoints, but it's weapons can also be damaged, and it's crew can be killed.

The Cat itself does not attack directly, it will quite happily float around the screen for a minute, and doesn't even make any aggressive movements. The crew seem to have other ideas, and will fire it's cannons towards the player, or with reckless abandon should the player not be in reach. The back of the boat also acts as a Penguin generator.

There is no true way to destroy this creature, even if the head takes fatal damage, the ship will continue to float around the screen, and the guns will continue to shoot. The Cat Battleship will eventually leave by it's own accord, and the crew will drop into the ocean, regardless of whether you "defeat" it or not. 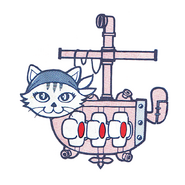 Retrieved from "https://gradius.fandom.com/wiki/Cat_Battleship?oldid=28238"
Community content is available under CC-BY-SA unless otherwise noted.