("Flight of The Bumble Bee" by Nikolai Rimsky-Korsakov)

Captain Penguinovski the 3rd (キャプテンペンギンノフスキーIII?) is the first boss in Parodius Da!

Much like Big Penguin, he is a parody of Tutankhamon from Life Force.

Captain Penguinovski will create a shield comprised of smaller penguins to protect him - these fire bullets at the player at increasing speed. After a while, the small penguins will move away from the boss and attempt to ram the player, after which the boss will summon them again. His weak point is his belly button.

Captain Penguinovski makes an appearance in the Gokuraku Parodius! slot machine. The Pikopiko Hammer and the card appear on a photo; push the "A" button three times and the card photo will appear in the bonus slot. 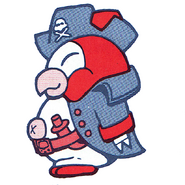 Captain Penguinovski in the arcade version

Retrieved from "https://gradius.fandom.com/wiki/Captain_Penguinovski_the_3rd?oldid=28264"
Community content is available under CC-BY-SA unless otherwise noted.