"Stage Boss"
The Blaster Cannon Core (ブラスターキャノンコア, Burasutā Kyanon Koa?) is the fifth boss in Gradius V. It is the guardian of the Asteroid Front Base.

The Blaster Cannon Core can be very difficult to destroy due to the asteroids that are constantly incoming and how you need to use them to defend yourself against incoming fire.

It has two attack phases:

The Core maneuvers through the asteroid field laying many mines that explode and release bullets all around them. At the same time, it loosely attempts to ram you by moving into your row after each pass. Although very risky, you can dispose some mines before they detonate. After some time, it will reappear on the right and release its wings.

The Core starts shooting many bullets aimed at the player and the only real defense against them are the numerous asteroids floating around. Next, the cannons charge up and release laser streams that break up the asteroids. This is also the moment when boss is most vulnerable. 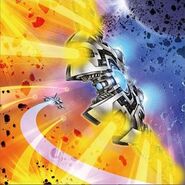