Big Penguin is a penguin of gigantic proportions, who appears as a boss in the first stage. Its spinning shield and means of attack mimic and parody the NES-exclusive boss Tutankhamon from Life Force.

Big Penguin will create a shield comprised of smaller Round Penguins to protect him; these fire bullets at the player at increasing speed. He will also throw a neverending supply of wine bottles as projectiles. His weak point is his belly button. 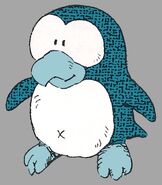 Round Penguin
Add a photo to this gallery

Retrieved from "https://gradius.fandom.com/wiki/Big_Penguin?oldid=27496"
Community content is available under CC-BY-SA unless otherwise noted.