Big Core MK III is the third boss to be dubbed Big Core and it debuted in Gradius III. It is drastically different than either of the two previous ones. As you may have already guessed, this one has three cores to destroy. The SNES version of Gradius III calls this QB2B.

Big Core MK III attacks by opening up and shooting lasers out of it's wings. Then a reflective laser shoots and bounces off of the giant lasers. If the front cores are destroyed, then the reflecting lasers are exchanged for mini lasers. When closed, it fires five lasers, unless the front two cores are destroyed, then it fires four lasers (either the traditional Big Core MK I pattern or two normal and two semi-auto). When you get above or below it, it fires four lasers behind itself, and eventually it will move towards the left side of the screen and attack you with them.

Gradius V adds some new tactics. First, it will attempt to ram you similar to Big Core MK II. Now the player have a chance to destroy the back core directly. There are new attacks here as well. It will shoot straight lasers and homing lasers out of the wings while shooting bullets and sometimes, even turn around to attack regardless if the front cores are destroyed.

As seen in Gradius V 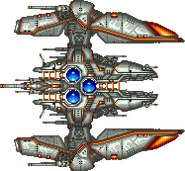 As seen in Gradius III (Arcade) 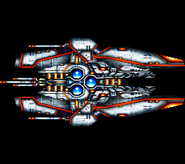 As seen in Gradius IV 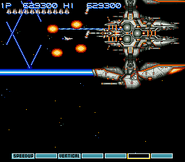 As seen in Gradius III (SNES)

As seen in Gradius V
Community content is available under CC-BY-SA unless otherwise noted.
Advertisement