Big Core MK II is a major upgrade from the original Big Core. He's much larger, has red streaks instead of yellow, can open up to reveal two cores (three in Solar Assault), can shoot many more lasers, and a new attack pattern. He has been featured in several games as well, one of the most obscure is Ganbare Goemon 2 on the NES as a mini-boss. The SNES version of Gradius III calls him Ice Ice. In Gradius Gaiden, he is in the second stage as one of the boss debris. He was not featured in the NES version of Gradius II.

If you're away from him, he will fire Big Core's signature four laser spread. However, if you're in front of him, he will open up and fire his whole laser array at you. When you destroy one core, the other side it's on will stop functioning, meaning only half of his lasers will work and you can stay in that area. This is good and makes the rest of the fight much easier.

In Solar Assault, three satellites (which are destroyable) accompany him to aim at you and protect the cores if he uses the laser attack. If all satellites are down, he will be vulnerable and you can easily destroy his cores. His own laser attack is similar to Big Core MK III's large lasers used to limit player movement.

In Gradius V, he can tilt to face you and shoot and also occasionally tries to ram you. In addition, he will sometimes go berserk, spinning rapidly and firing his lasers randomly. 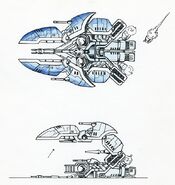 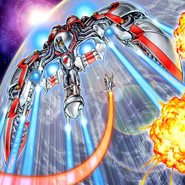 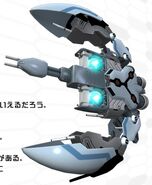 As he is seen in Otomedius G.