The Amusement Park is the third stage in Parodius Da!, exclusive to the NES port of the game.

As expected from an amusement park-themed area, the layout is made up of many rides, including a rollercoaster and a ferris wheel. However, there's a feature where you can actually ride the rollercoaster. Be careful at the loop, as it's the most common area where certain players mess up and die.

There's a hidden stage within this theme park, which resembles the eighth stage of the Super NES version of the game. 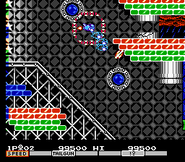 Go into the area where I shot. Hidden stage is in there. However, it's not easy but keep trying and you'll get in.
Add a photo to this gallery
Retrieved from "https://gradius.fandom.com/wiki/Amusement_Park?oldid=28267"
Community content is available under CC-BY-SA unless otherwise noted.